Posted by Editor at Thursday, December 25, 2008 No comments: 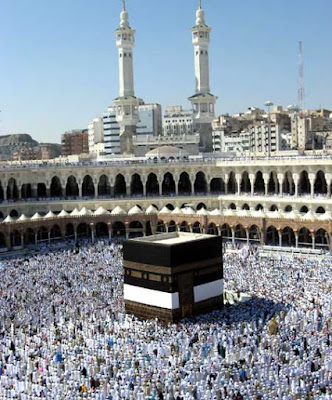 MECCA, Dec 11 (Bernama) - The 1429 haj season that is coming to a close is a success based on three factors - no reports of diseases, no bad traffic congestion and no stampedes during the stoning ritual at Mina.

That is the conclusion by 250 foreign media representatives, Malaysia included, who are in the holy land to report on the largest human gathering in the name of religion.

The Saudi Statistics Department said some 2.5 million pilgrims comprising 1.7 million foreigners performed the haj, the fifth pillar in Islam. The number did not include pilgrims without permits.

"No disease epidemic was reported during this haj season," said Health Minister Hamad Al-Manie who put it down to compulsory meningitis and flu jabs on pilgrims.

Raja Abdullah had allocated a huge sum for the 10,000 health workers to serve 24 hospitals and 188 health centres here and in Medina.

"The organisation of this year's haj shows the competence and skill levels of Saudi authorities. They have become adept at crowd management.

In the past, we were almost resigned to stampedes," Ali Akbar Dareini, an Associated Press reporter from Tehran was quoted as telling the Arab News daily newspaper.

The most challenging job was to ensure security during the night at Mina and the stoning ritual that passed without incidents.

"This is because of the completion of the triple storey 1.2km bridge at the pillars of Ula, Wusta and Kubro and implementation of one way traffic, stoning at designated times and forbidding pilgrims from carrying luggage during stoning.

"The situation at Mina was a lot better than previous years. We have to thank the Saudi Arabian government for this," Minister in the Prime Minister's Department Datuk Seri Dr Ahmad Zahid Hamidi said before leaving for Jeddah Wednesday.

The transportation system had improved with the deployment of 70,000 buses plying Mecca to Arafah, Muzdalifah and Mina.

"When I performed the haj in 2006, some pilgrims who took 22 hours for the 22 kilometre trip from Mecca to Arafah," said Zahid.

Mina has been deserted as pilgrims converged on Masjidil Haram as pilgrims who did the stoning for three days do the tawaf (circumambulation) and saie (jogging) rituals.

Those who only did the stoning for two days would be performing the tawaf wida' (farewell circumambulation) before leaving the holy city.

Malaysian haj delegation chief Mohd Salleh Abdul Mubin said the pilgrims who did the stoning for three days would be returning for the tawaf, saie and tahlul (shaving of hair) to bring the haj to a close.
Posted by Editor at Friday, December 12, 2008 1 comment: